In the most recent years, the American Silver Eagle program has entered a tumultuous phase. A dramatic increase in demand for physical precious metals has impacted both bullion and collector offerings. The bullion coins recorded successive record breaking sales. Various collector coins were canceled in response to the demand for bullion coins. This was later followed by a rapid expansion in the number of collector products offered.

During 2008, global financial uncertainty caused many to seek the safe haven of physical precious metals. Demand for the US Mint’s silver bullion coins surged, resulting in periodic suspensions and a recurring allocation program, which rationed the available supply of coins to authorized purchasers. For an extended period, the US Mint was unable to meet the full public demand for the increasingly popular bullion coins.

Three successive annual sales records were achieved. The first came in 2008 when the bullion coin mintage reached 20,583,000, nearly doubling the prior annual record from more than 20 years ago. New records were established for the next three years, culminating with a mintage of 40,020,000 for 2011.

The intense demand for bullion coins interrupted collector offerings. In 2009, both the collectible uncirculated and proof Silver Eagles were canceled as the Mint diverted all incoming precious metals blanks to bullion coin production. In the following year, the proof coin would be offered, however it would take until 2011 for the collectible uncirculated version of the coin to be offered once again.

In late 2011 and throughout 2012, the US Mint released an outpouring of new collector products containing the Silver Eagle. This started with the 25th Anniversary Set, which achieved a sell out within hours of release, followed by a special San Francisco Set. Two additional products were released by the end of 2012. Will the proliferation of Silver Eagle collector products continue into the future?

Find detailed information about the 2008-2012 Silver Eagles by date at the pages listed below. 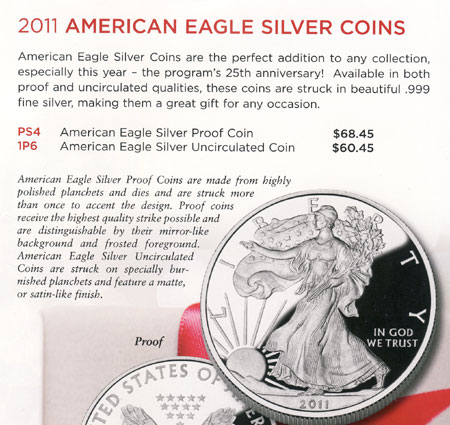