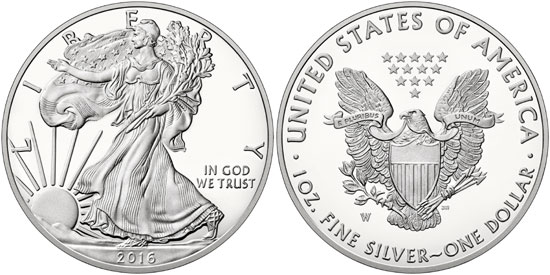 The 2016 American Silver Eagle (Buy on eBay) represented the 30th anniversary release of the popular bullion and collector coin series. To mark the occasion, legislation was enacted which required the collector versions of the coin to carry special incused edge lettering. While the bullion coins were released on the typical schedule, the collector coins would be released late in the year due to preparations necessary to strike the coins with edge lettering.

Sales of the 2016 Silver Eagle bullion coins opened on January 11, 2016. On that day, authorized purchasers were able to order the one ounce coins under the standard allocation method. The opening day orders reached 2,756,500 ounces, which was down modestly from the prior year amount. For the entire month of January, orders reached 5,954,500 ounces, which was up slightly from the prior year. While demand for the bullion coins remained steady during the first half of the year, orders would decline during the summer months before rebounding in the fall. The 2016-dated coins were officially sold out on December 6, 2016 with total annual sales of 37,701,500 ounces, down by nearly 20% compared to the prior year.

The collectible versions of the American Silver Eagle and related products would be released much later in the year than typical. This was due to the extra time required to fulfill the legislative requirements of Public Law 114-94, Section 73002. This section required the proof and uncirculated versions of the Silver Eagle issued during the 2016 calendar year to have a smooth edge with incused lettering designating the 30th anniversary of the series. 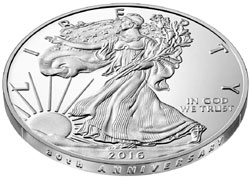 The individual 2016 Proof Silver Eagle (Buy on eBay) would be offered for sale starting on September 16, 2016, compared to a starting date of January 2 in the prior year. The coins were produced at the West Point Mint with the “W” mint mark and the well known “Walking Liberty” obverse design paired with the heraldic eagle reverse design. Rather than a reeded edge, the coins were struck with a plain edge and the incused lettering “30th Anniversary”. The coins were priced at $53.95, representing an increase of $5 compared to the prior year. There was no maximum mintage or household ordering limit established. Opening sales for the product reached 322,317, up considerably from the opening sales of 262,377 units for the prior year offering.

With nearly the entire year completed, the individual 2016-W Uncirculated Silver Eagle (Buy on eBay) was offered for sale on December 1, 2016. These coins were struck on specially burnished blanks with an uncirculated finish and the “W” mint mark. Similar to the proof coins, the uncirculated coins had a plain edge and incused lettering indicating “30th Anniversary”. The coins were priced at $44.95 each with no stated maximum mintage and no household ordering limits imposed. Opening sales reached 134,925 units in the first week of availability.