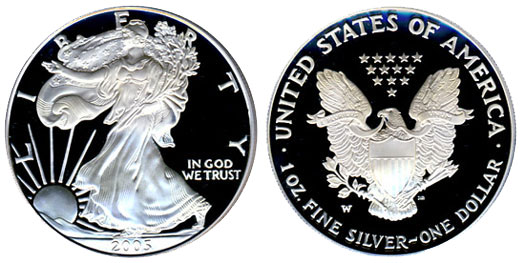 The 2005 Silver Eagle (Buy on eBay) bullion coins had a mintage of 8,891,025. This was very close to the number of coins sold in the prior year and represented a relatively strong performance on a historical basis. Interest in precious metals was supported by steadily increasing prices.

The United States Mint began sales of the 2005 Proof Silver Eagle (Buy on eBay) on March 15, 2005. This release date was several weeks earlier than typical. The coins were sold at $27.95 and had an unlimited mintage during the year of issue. In prior years, the Mint had set a maximum authorized mintage for the offering, which they had been steadily adjusting higher over the years. The unlimited mintage and longer availability period helped bring proof coin sales to their highest level since 1987.

For collectors of certified Silver Eagles, perfect graded proof coins in both NGC PF 70 Ultra Cameo and PCGS PR70DCAM are relatively attainable. The US Mint continued to produce coins of consistently high quality. On the bullion coin side, PCGS and NGC MS70 graded coins are relatively available.