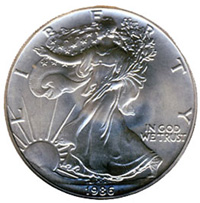 The American Silver Eagle was created through the passage of legislation, which directed the Secretary of the Treasury to mint and issue silver bullion coins, with a specified weight, silver content, and design. Throughout the history of the series, there have been other legislative actions, which impacted the offering.

Initial authorization for the coins was provided under Title II of Public Law No. 99-61, known as the “Liberty Coin Act”. The resolution had been passed in the House of Representatives on March 5, 1985 and passed in the Senate with amendments on June 21. The House concurred with the amendments on June 24, and President Ronald Reagan signed the bill into law on July 9, 1985.

The Act specified that the coins would have a diameter of 40.6 mm, weight of 31.103 grams (one troy ounce), and composition of .999 fine silver. The obverse design was to be symbolic of Liberty, while the reverse would contain an eagle. Required inscriptions included the words “Liberty”, “In God We Trust”, “United States of America”, “1 oz. fine silver”, “E Pluribus Unum”, and “One Dollar”.

The coins which would later become known as American Silver Eagles were to be sold to the public based on the market value of bullion plus the cost of minting, marketing, and distributing the coins. The Secretary of the Treasury was required to issue the coins in quantities sufficient to meet public demand. Silver for the coins was to be acquired specifically through purchase from national defense stockpile of 137.5 million troy ounces.

On November 24, 1986, the first Silver Eagles were released to the public. The United States Mint distributed the coins through an initial group of 25 authorized purchasers. To become an authorized purchaser, prospective dealers had to show net worth of $50 million and liquid assets of $10 million. This small group of dealers was able to purchase the coins directly from the Mint based on the market price of silver plus a fixed mark up. In turn, they would resell the coins to the public or other dealers, as well as facilitate a two way market. 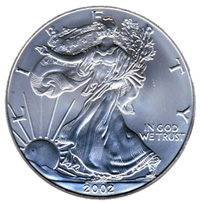 The program continued successfully for many years. In 2002, it became apparent that the national defense stockpile of silver would soon become depleted. A bill known as “Support of the American Eagle Silver Bullion Program Act” was passed in the House and Senate. With the signature of President Bush on July 23, 2002, the bill became Public Law 107-201. It authorized the Secretary of the Treasury to purchase silver on the open market when the silver stockpile had become depleted. At the time, the United States Mint estimated that they may purchase as much as 9 million troy ounces of silver per year.

In the later part of the decade, the demand for Silver Eagles proved to be even greater. This became problematic when the United States Mint was not able to purchase silver planchets necessary to strike the bullion coins required to fulfill public demand. The United States Mint was forced to suspend sales on several occasions in 2008 and 2009, and ration available supplies for an extended period of time. The situation resulted in the cancellation of the 2009 Proof Silver Eagle, since the collector versions were not legally required to be produced. 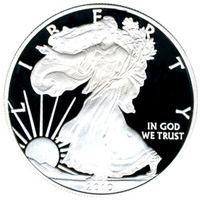 At the request of the United States Mint, a bill with a legislative fix for problem was introduced known as “Coin Modernization, Oversight, and Continuity Act of 2010”. The bill was passed in the House of Representatives and Senate, and then became Public Law No. 111-302 with President Obama’s signature. Under the Act, the previous requirements related to issuance of the American Silver Eagle bullion coins were changed. The new requirements called for the Secretary of the Treasury to strike the coins in both quantities and qualities that the Secretary determined to be sufficient to meet public demand. The purpose of the change was to allow Proof Silver Eagles to be produced even at times when bullion coins were not being minted in quantities needed to satisfy full public demand.

After a one year hiatus, the US Mint resumed issuance of the popular collector proof version. The changes affected through legislation were not specifically required for the offering of the 2010 Proof Silver Eagle, as sales commenced prior to the bill being signed into law. However, the legislative change will provide some assurance and legal backing for the continued production of future proof and collector issues of the series.

On December 4, 2015, Public Law 114-94 was enacted. The bill spanned hundreds of pages with one small section having ramifications for the American Silver Eagle program. Under Section 73002 of the Act, proof and uncirculated versions of the coins issued during calendar year 2016 were required to have a smooth edge incused with a designation that notes the 30th anniversary of the first issue of the coins.