To start the new millennium, the American Silver Eagle bullion and collector coins experienced stronger sales. Interest in precious metals investing was on the increase as gold and silver prices began a multi-year ascent. The United States Mint would also introduce a new collectible version of the coin, as well as a popular set to celebrate the 20th anniversary of the program.

From the period of 2001 to 2007, Silver Eagle bullion sales would range from around 8.5 million to 10.5 million coins annually. This was a much stronger performance than the previous ten years, which had seen mintages frequently within the 4 million range and as low as 3.6 million. The bullion mintage for 2006 reached 10,676,522, representing the highest annual total since 1987.

Staring in the year 2001, the United States Mint began to produce the annual proof version of the coin at the West Point Mint with the coins carrying the “W” mint mark. Earlier in the series, regular proofs had been struck at either San Francisco or Philadelphia. The new location seemed to cause an increased interest as sales jumped above 700,000 and later above 800,000 for several years within this range.

A new collector version of the coin was introduced in 2006, which would be known as the collectible uncirculated version. These coins were struck on specially burnished blanks and carried the “W” mint mark. After making their first appearance within the 20th anniversary set, the coins became an annual offering, available either individually or within certain other numismatic products.

Find detailed information about the 2001-2007 Silver Eagles by date at the pages listed below. 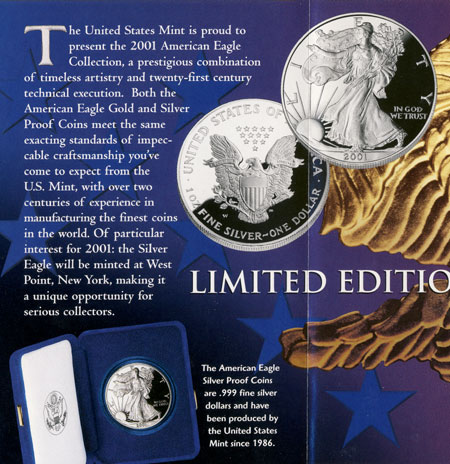